Home automation is a field within building automation, specializing in the specific automation requirements of private homes and in the application of automation techniques for the comfort and security of its residents. Although many techniques used in building automation (such as light and climate control, control of doors and window shutters, security and surveillance systems, etc.) are also used in home automation, additional functions in home automation can include the control of multi-media home entertainment systems, automatic plant watering and pet feeding, automatic scenes for dinners and parties, and a more user-friendly control interface.

When home automation is installed during construction of a new home, usually control wires are added before the interior walls are installed. These control wires run to a controller, which will then control the environment.

In extreme installations, rooms can sense not only the presence of a person but know who that person is and perhaps set appropriate lighting, temperature and music/TV taking into account day of week, time of day, and other factors.

Other automated tasks may include setting the air conditioning to an energy saving setting when the house is unoccupied, and restoring the normal setting when an occupant is about to return. More sophisticated systems can maintain an inventory of products, recording their usage through an RFID tag, and prepare a shopping list or even automatically order replacements.

Some practical implementations of home automation are for example when an alarm detects a fire or smoke condition, then all lights in the house will blink to alert occupants. If the house is equipped with a home theater, a home automation system can shut down all audio and video components to alert the user to a possible fire or a burglar. 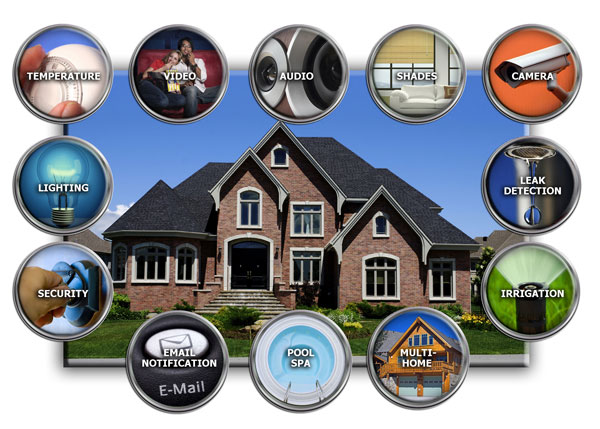